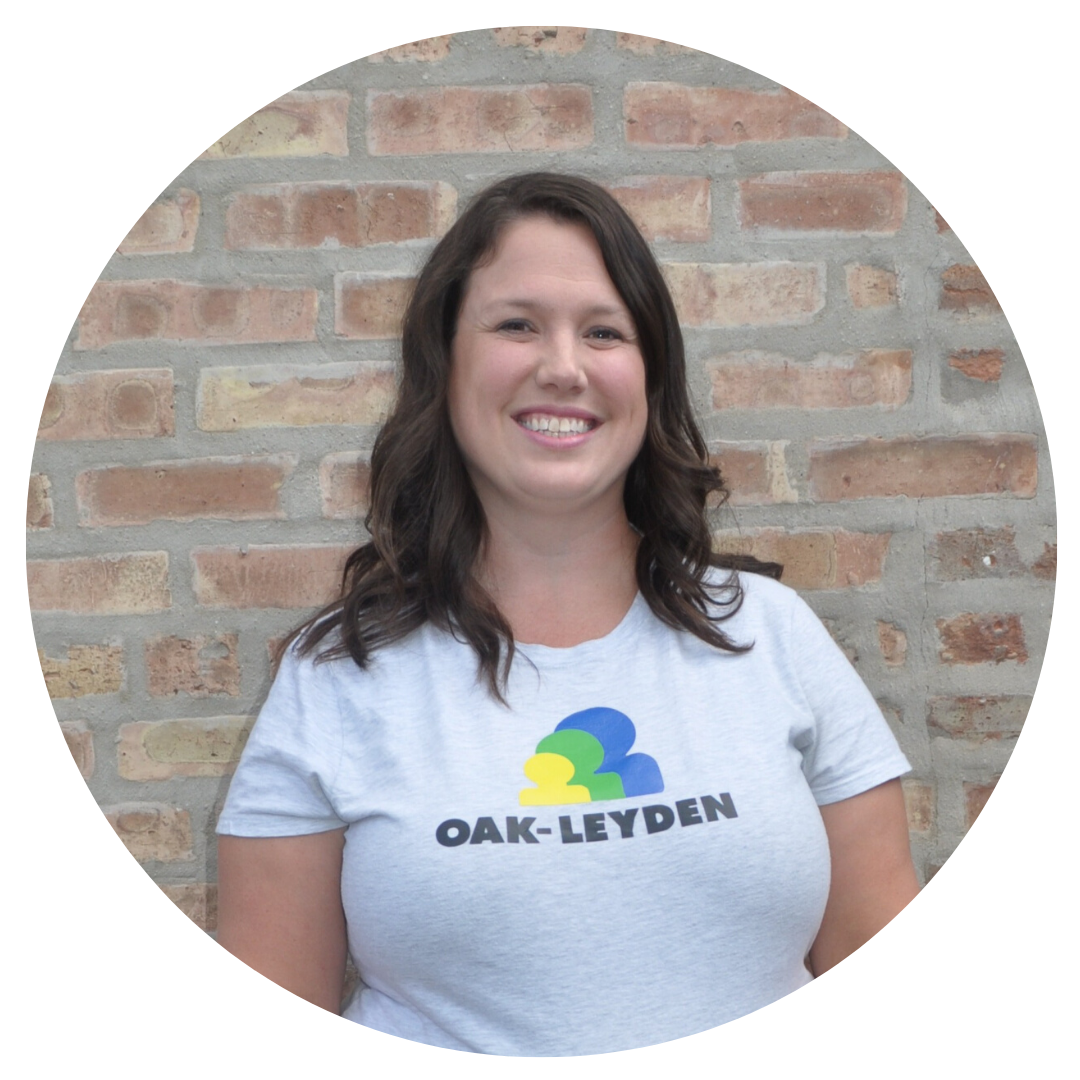 Melissa Ehmann – Director of Children’s Services
Melissa holds more than sixteen years of experience in the Early Intervention field, focused on securing needed therapies for children from birth to age three. She previously served as a service coordinator, staff trainer, and assistant manager at Child and Family  Connections/ Suburban Access in Westchester, Illinois. In her roles, she was deeply involved in coordinating services for families with children who have developmental disabilities and delays and forging connections with community partners. 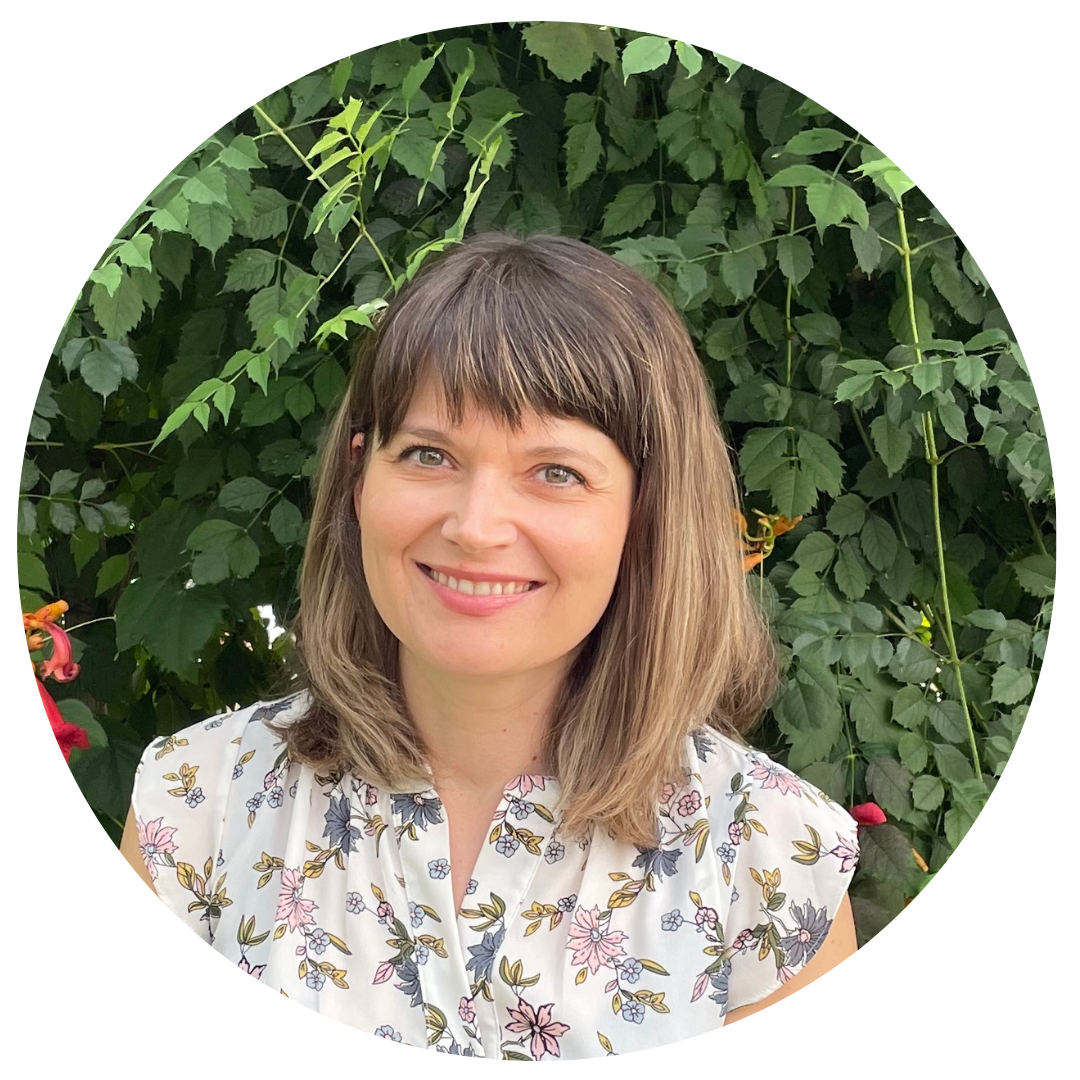 Monika Atkinson, M.Ed., – Developmental Therapist
Monika received her Master of Education degree from Northern Illinois University in 2006. She has had the privilege to work as an Early Childhood Special Education Teacher for the past 12 years. During her time as a teacher, Monika has had the opportunity to work with many children and families both in Polish and Spanish. She believes that a parent is the child’s first and most important teacher and looks forward to partnering with the many wonderful families in the area. Monika is very happy to be part of the Oak-Leyden team. 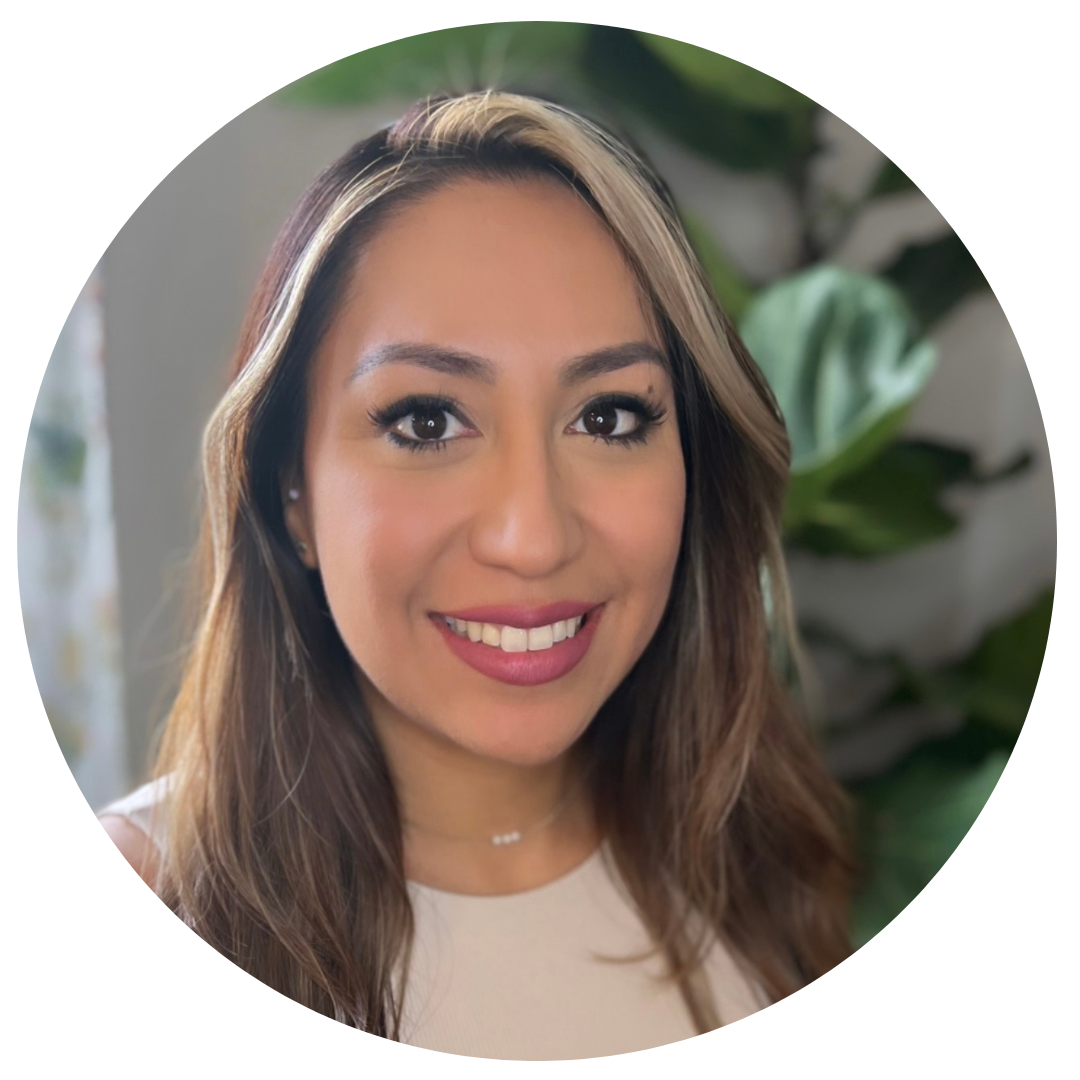 Aida Bugel – Physical Therapist Assistant
After recognizing the need for physical therapy in the Latinx/Hispanic community, Aida shifted her career from Massage Therapy to Physical Therapy, and successfully completed the Physical Therapy Assistant Program at Malcolm X College. She joined the Oak-Leyden team in July 2022, and completed the University of Illinois’ Early Intervention Program. As a mother herself, she is passionate about assisting children in overcoming motor delays by engaging kids through play, and the importance of informative parent coaching. She is delighted to add value to Oak-Leyden as the first bilingual Spanish-English speaking Physical Therapist Assistant. 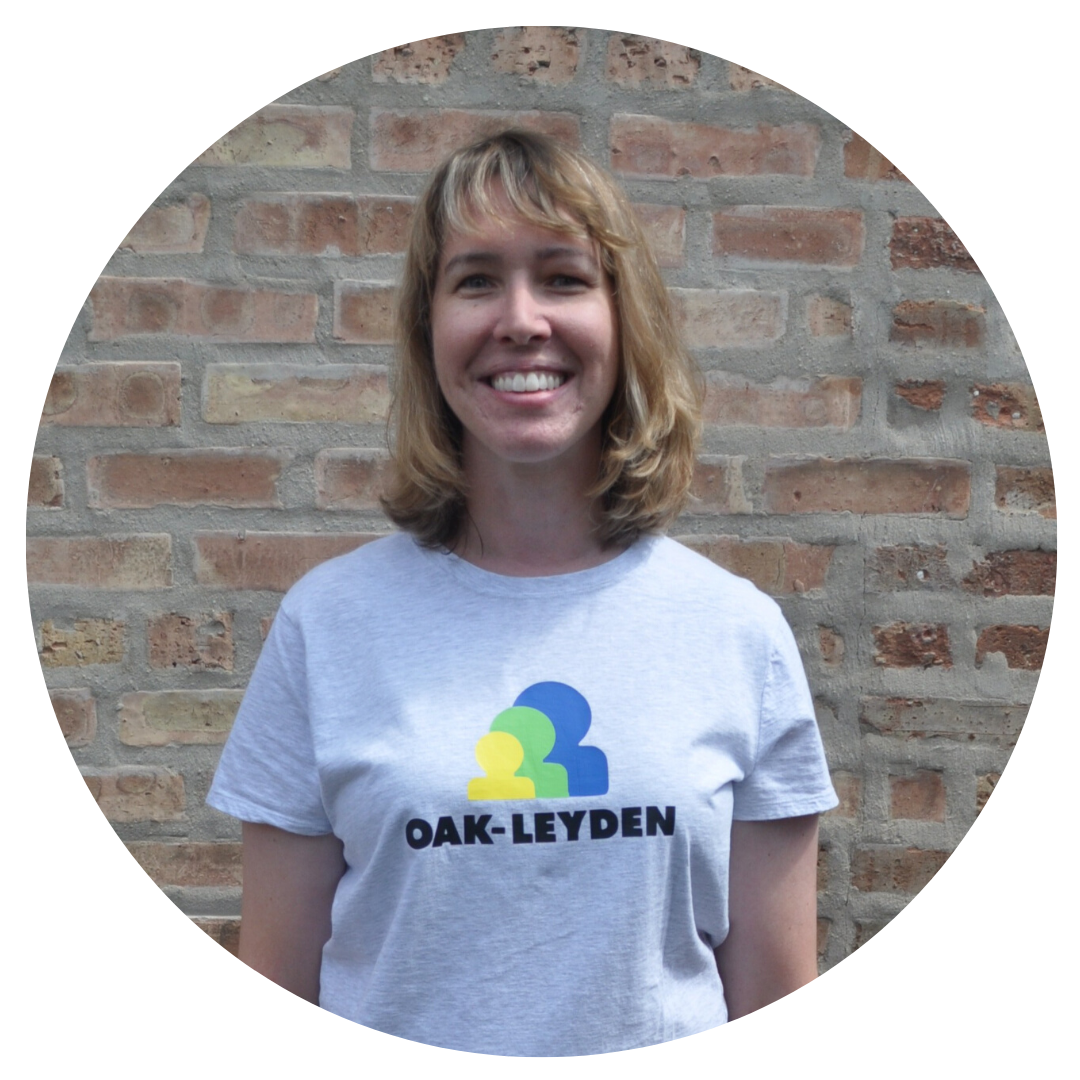 Julie Cameron, MA, CCC-SLP -Speech/Language Pathologist
Julie received a Bachelor of Science in Psychology from Loyola University and a Master of Arts in Speech-Language Pathology from Northern Illinois University. She joined the team at Oak-Leyden in 2007. She has extensive experience working with facilitating communication through non-verbal means, such as PECS and augmentative communication. She also has received training on feeding, autism spectrum disorders, and apraxia. 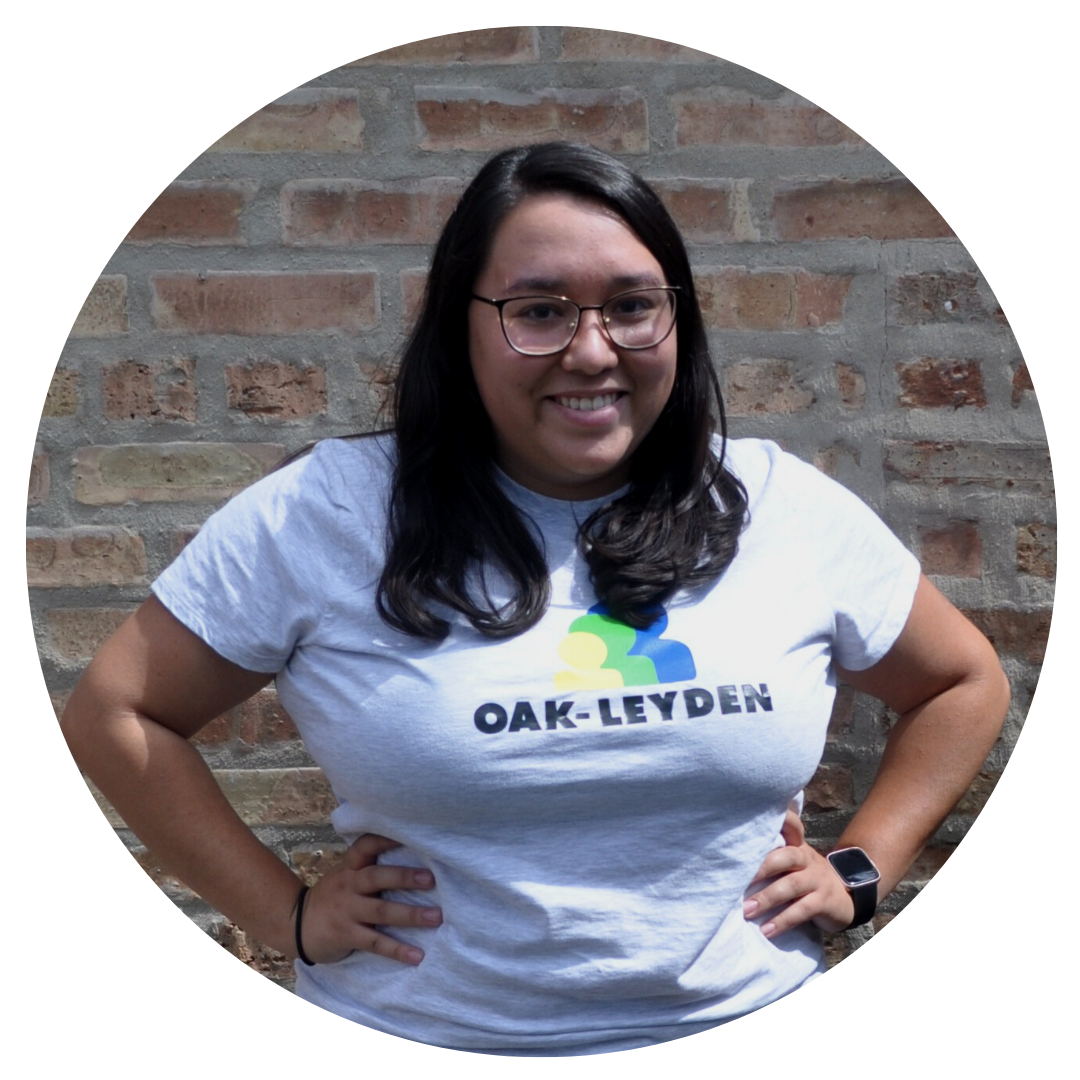 Ariella Chavarria MS, CCC-SLP – Speech/Language Pathologist
Ariella received a Bachelor of Arts in Speech and Hearing Sciences with a Concentration in Speech-Language Pathology from Indiana University Bloomington and a Masters of Science in Communicative Disorders from Jackson State University.  Ariella is a bilingual Spanish-English speaking therapist whose Master’s project was Bilingualism and Second Language Learners. 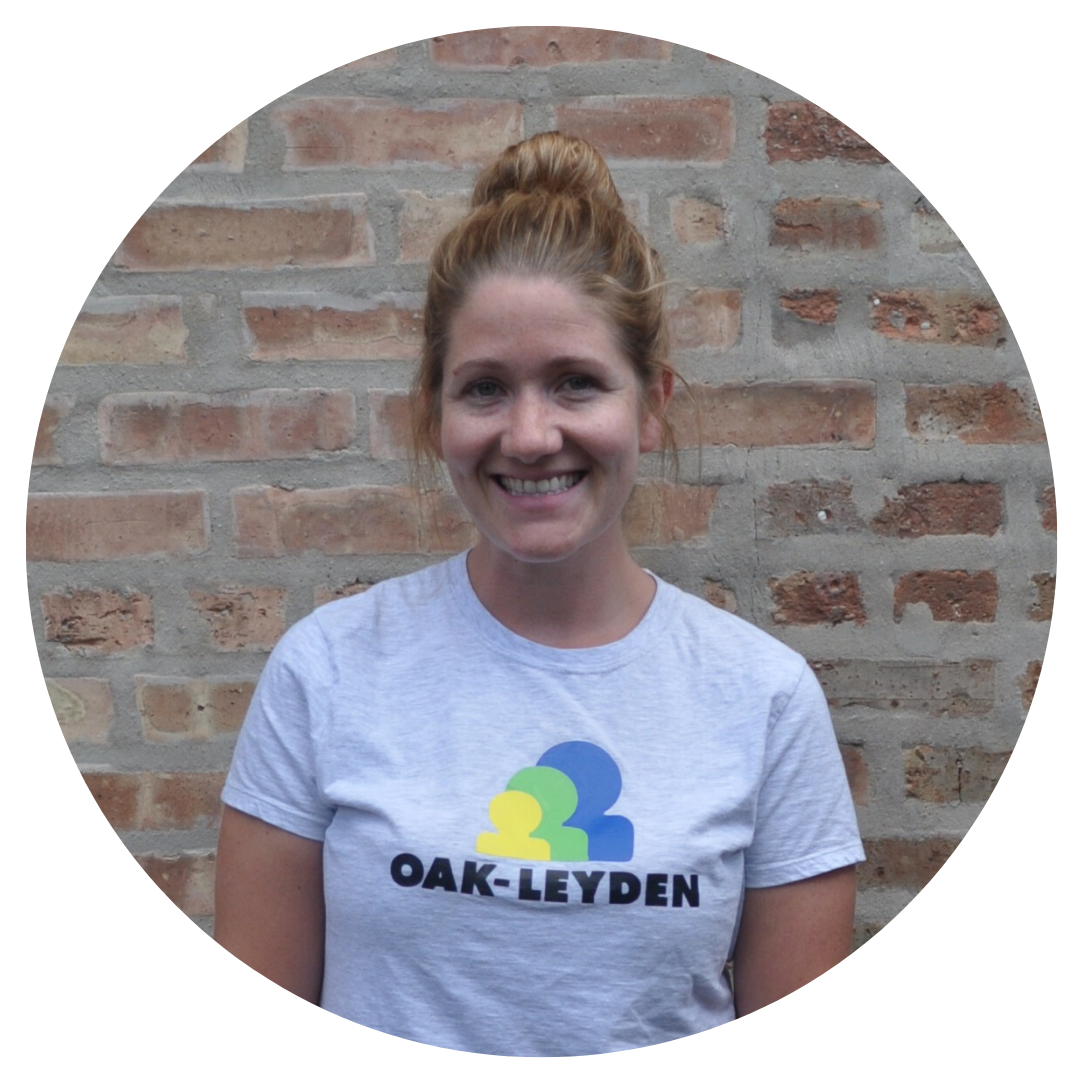 Katie Crehan, MS, CCC-SLP – Speech/Language Pathologist
Katie received her Master of Science degree from Rush University and joined the Oak Leyden team in November 2014.  Katie has attended special trainings in pediatric feeding including SOS, Food Chaining, and AEIOU approaches. In addition, she has experience working with children with autism, apraxia of speech, Down Syndrome, and children who are late talkers. 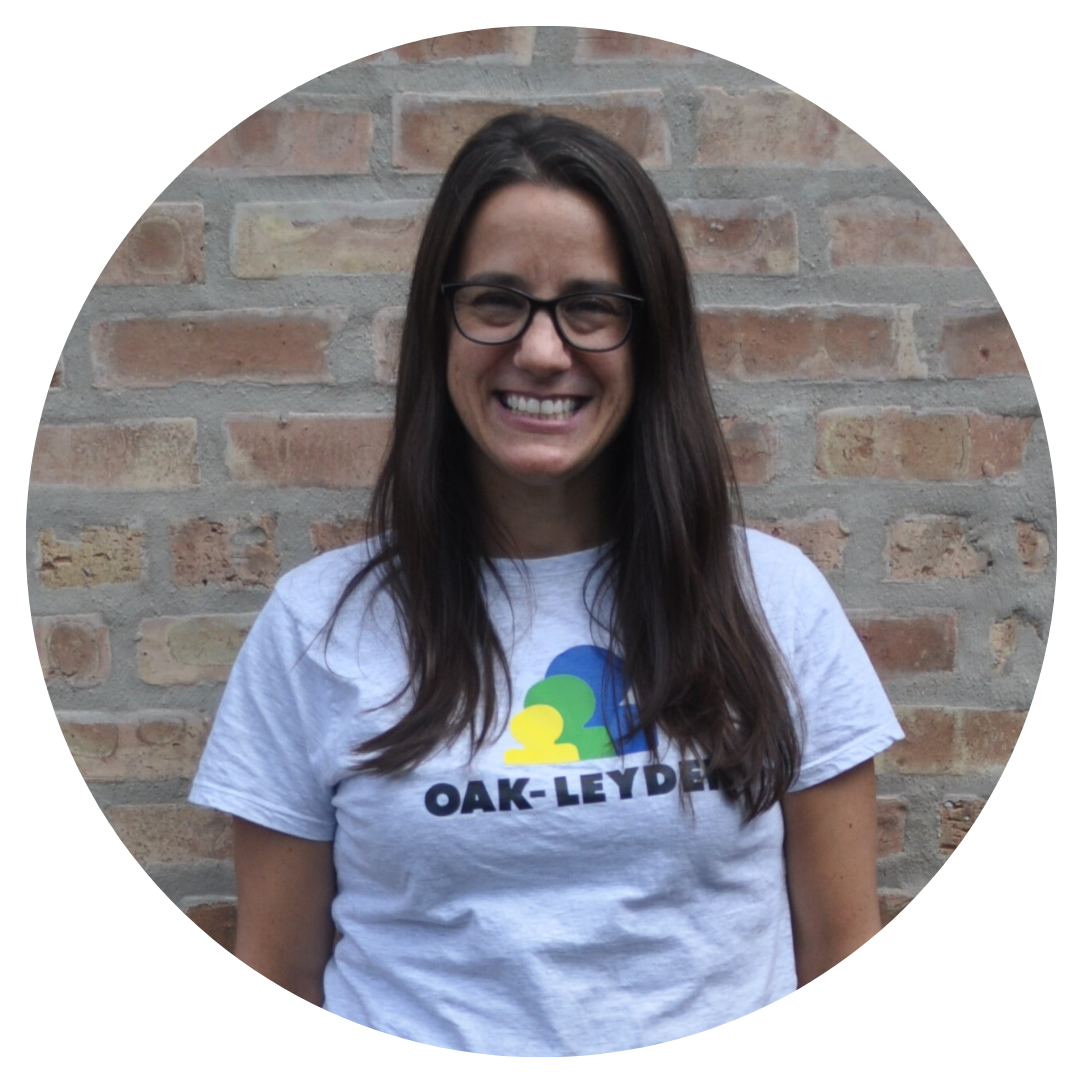 Gena Crane, MS – Developmental Therapist
Gena received a Master of Science in Child Development from the Erikson Institute in 2007 and joined the team at Oak-Leyden shortly thereafter. Gena enjoys working with children and their families, focusing on supporting the parent-child relationship, fostering a child’s play skills, and helping children and their families through important transitions. 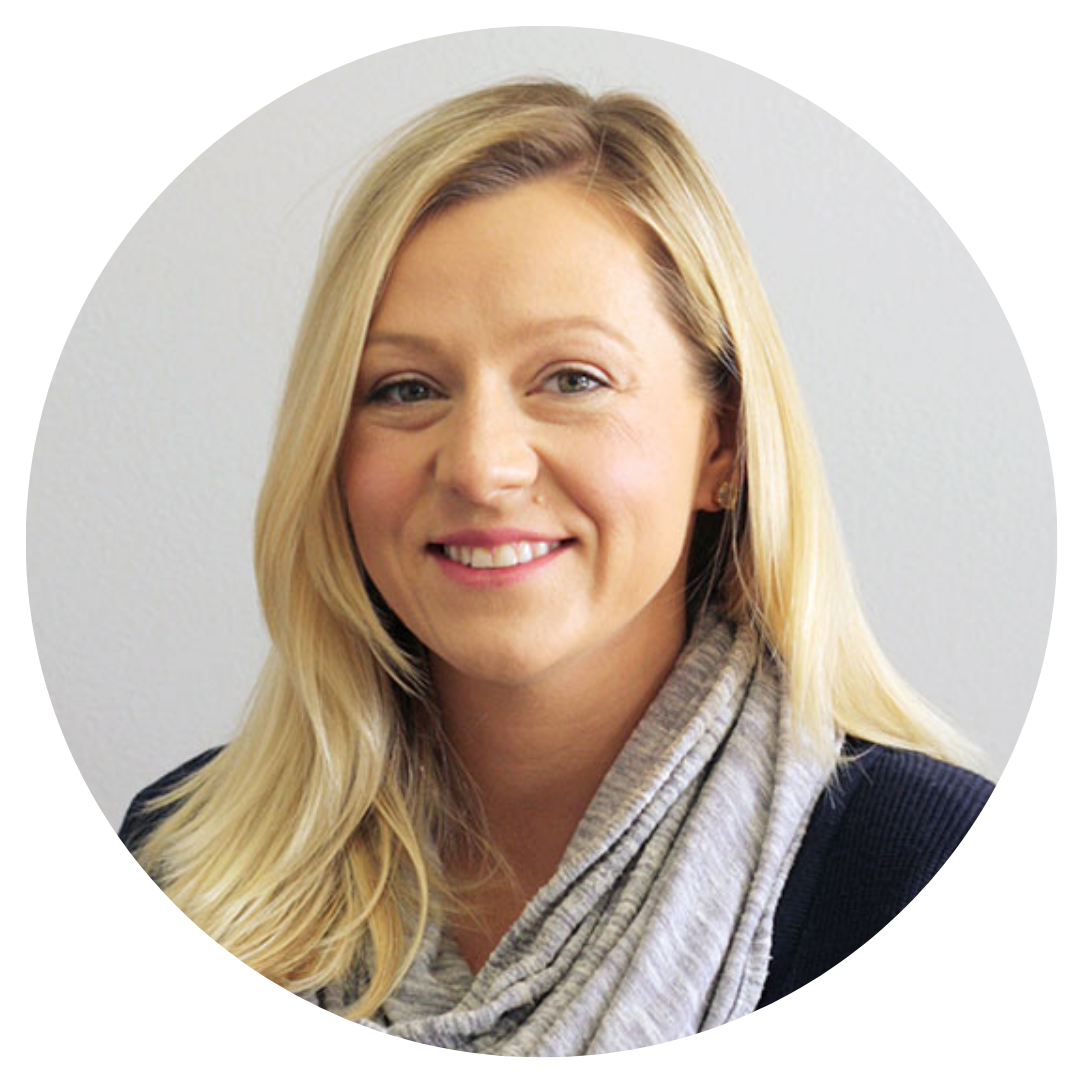 Renee Hanichak, MA, CCC-SLP – Speech/Language Pathologist
Renee received her Bachelor of Arts in Speech and Hearing Science and her Master of Arts in Speech-Language Pathology from The University of Iowa. She began working in pediatrics in 2010 and has loved every minute of it! In addition to individual therapy sessions, Renee also enjoys leading small peer groups as well as parent/child groups. Trainings and special interests include speech and language development, American Sign Language (ASL), social/pragmatics, and PROMPT. 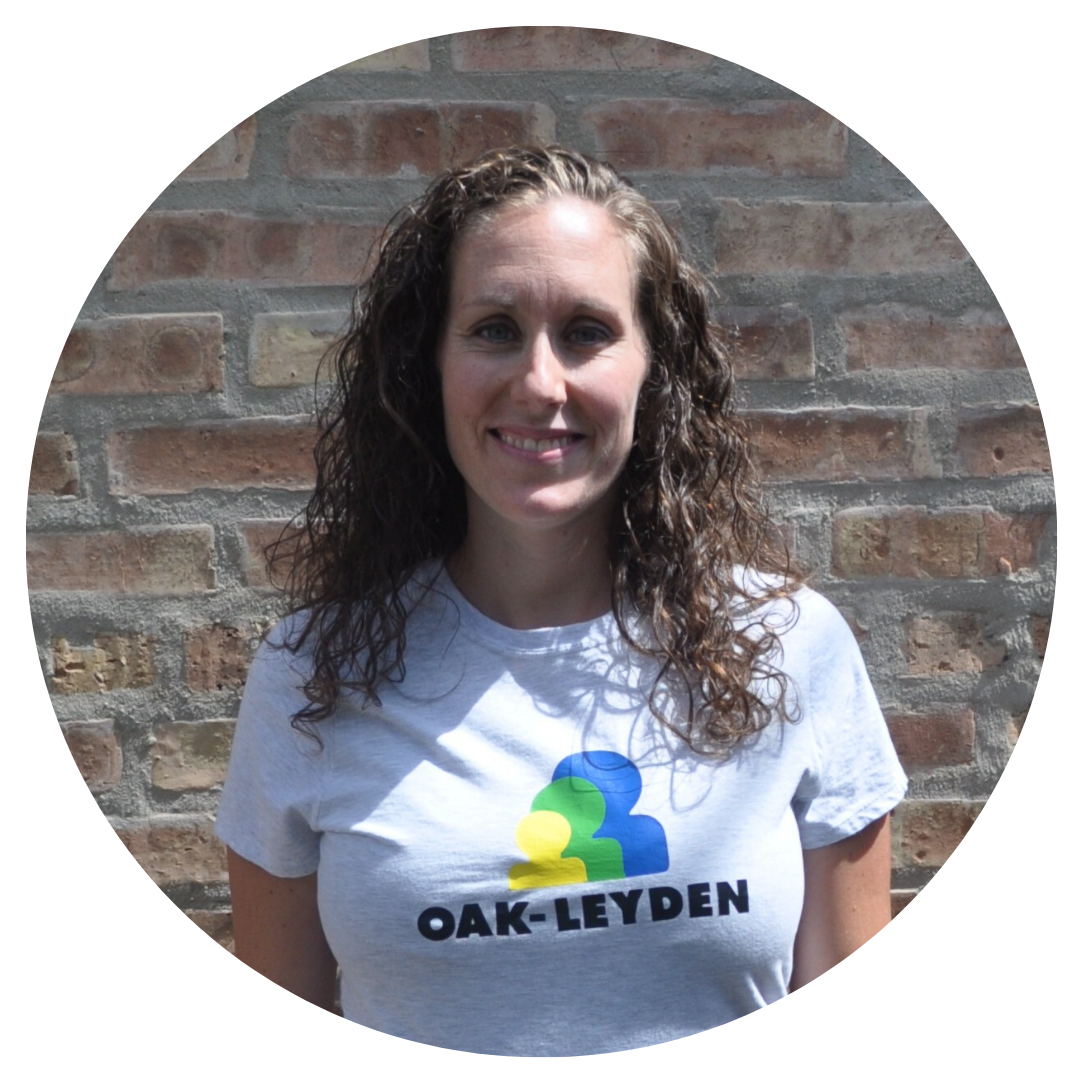 Rachelle Karnchanaphati, M.Ed., – Developmental Therapist
Rachelle received her Master of Education from Ashland University.  She joined the Oak Leyden team in September of 2018. Prior to Oak Leyden, Rachelle worked as a classroom teacher in Columbus, Ohio and as a Lead Therapist at Leep Forward Inc. in Chicago.  Rachelle is very happy to be a part of the Oak Leyden team, serving the families within the area. 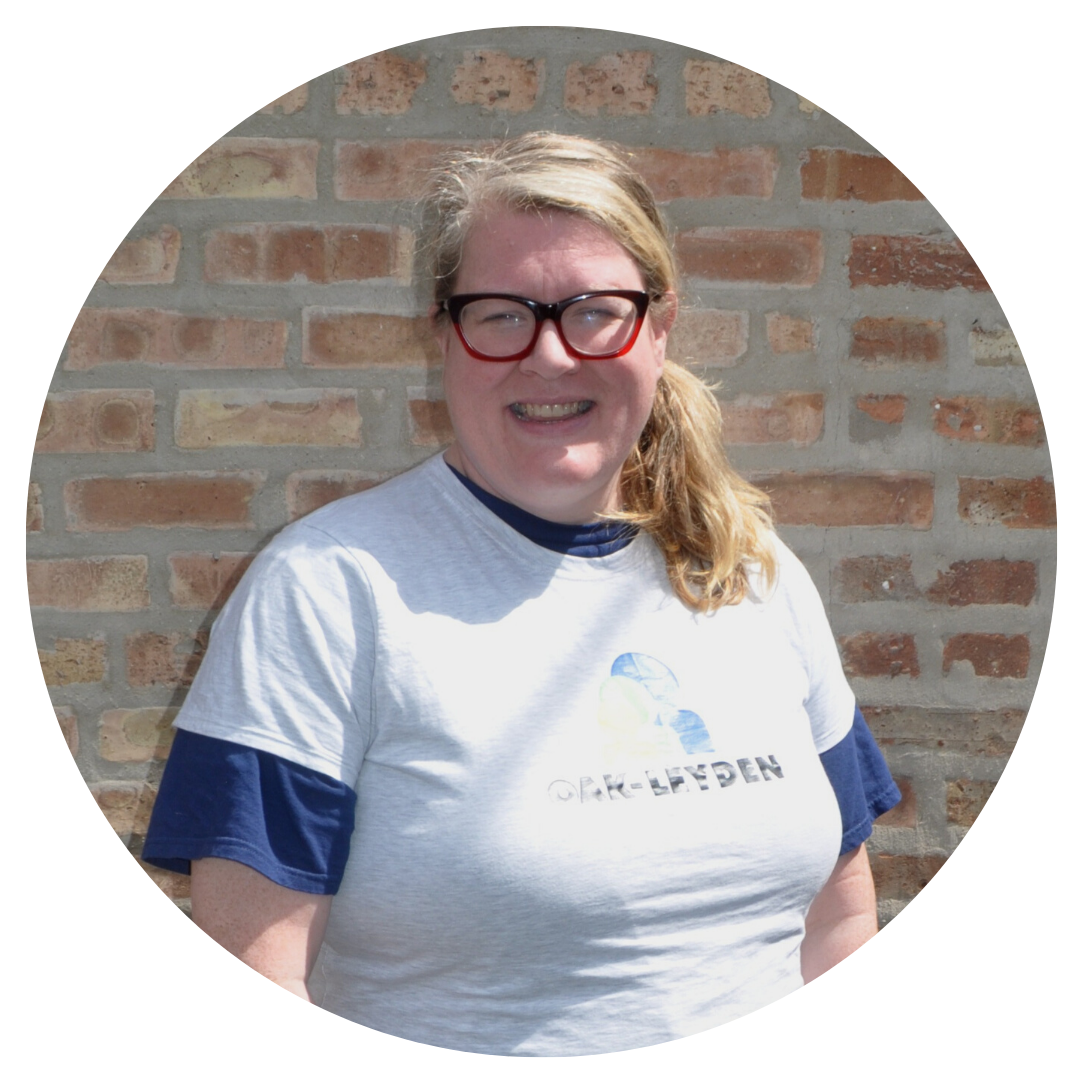 Alison Keane, Med – Developmental Therapist
received her Bachelor of Arts in Music and Communication from Houghton College and Master of Education in Human Services and Counseling from DePaul University. She has been providing group and individual Developmental therapy sessions at Oak-Leyden since 2006. Alison is also a registered Music Together teacher. 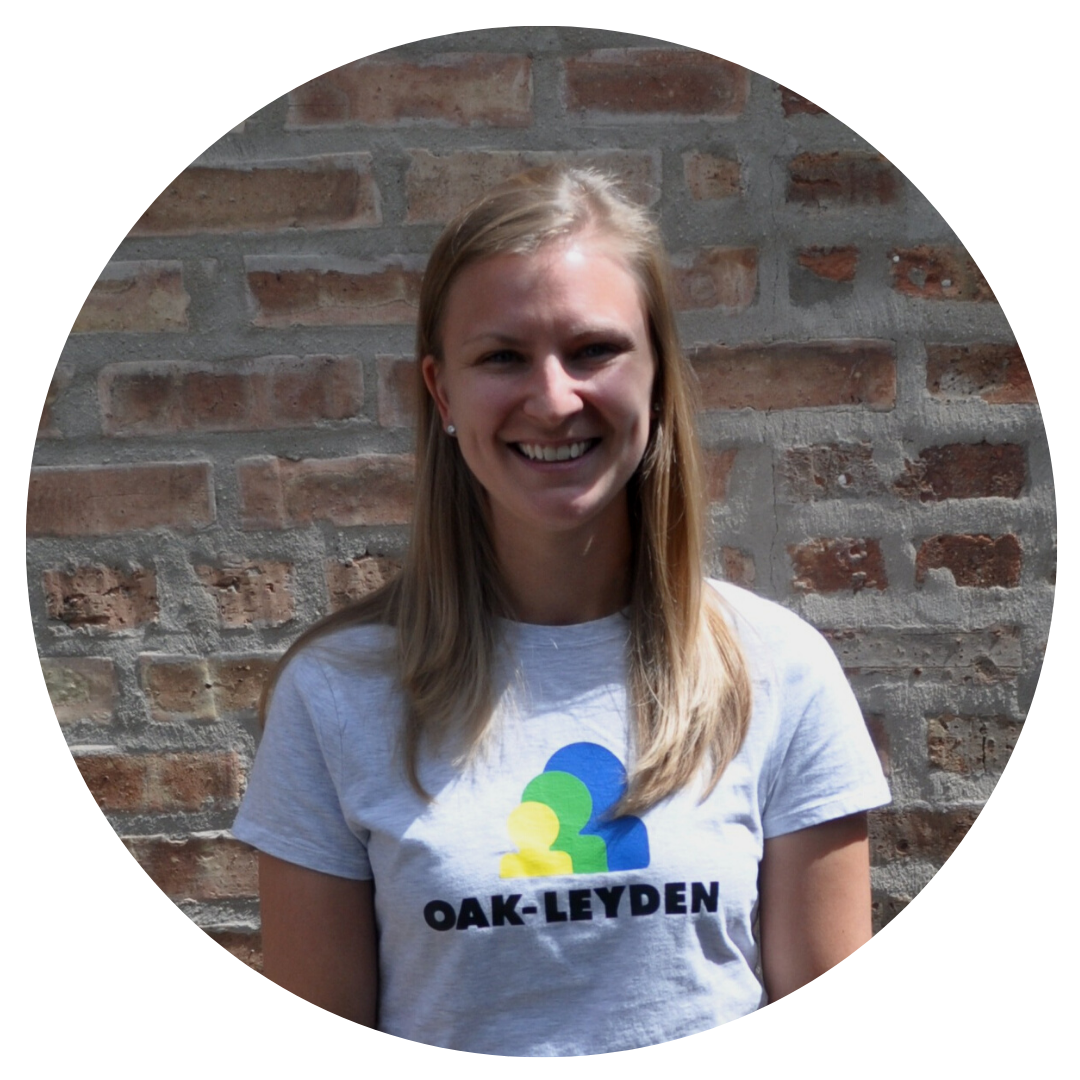 Abigail Koning, MSOT, OTR/L – Occupational Therapist
Abigail received her Masters of Science in Occupational Therapy from Grand Valley State University in Grand Rapids, Michigan. She began her career as a pediatric occupational therapist in an outpatient center for children with Autism Spectrum Disorders (ASD) and has significant experience working with children with ASD and sensory processing challenges. She has continuing education in the Get Permission Approach to feeding and Handwriting Without Tears. 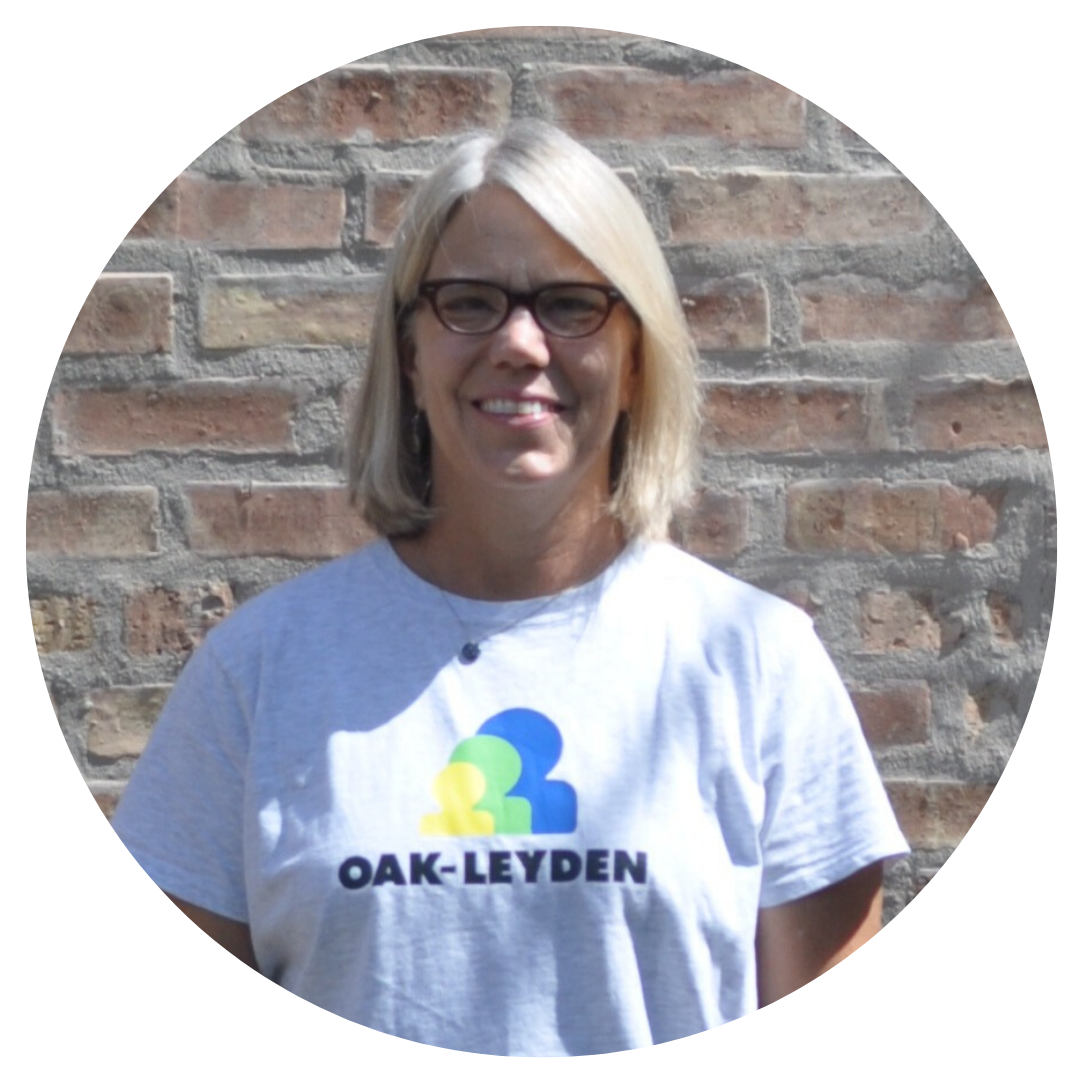 Susanne Klinger, MS, PT – Physical Therapist
Susan graduated from DePauw University in 1991. She then went into the Peace Corps until ‘93. She received her Master of Science in Physical Therapy from the University of Indianapolis in 1998. She worked at the Rehabilitation Institute of Chicago (currently Shirley Ryan Ability Lab) until 2003 doing both inpatient and outpatient pediatrics. She joined Oak-Leyden in 2005. In her 20 years of doing physical therapy with children, she has never stopped learning. 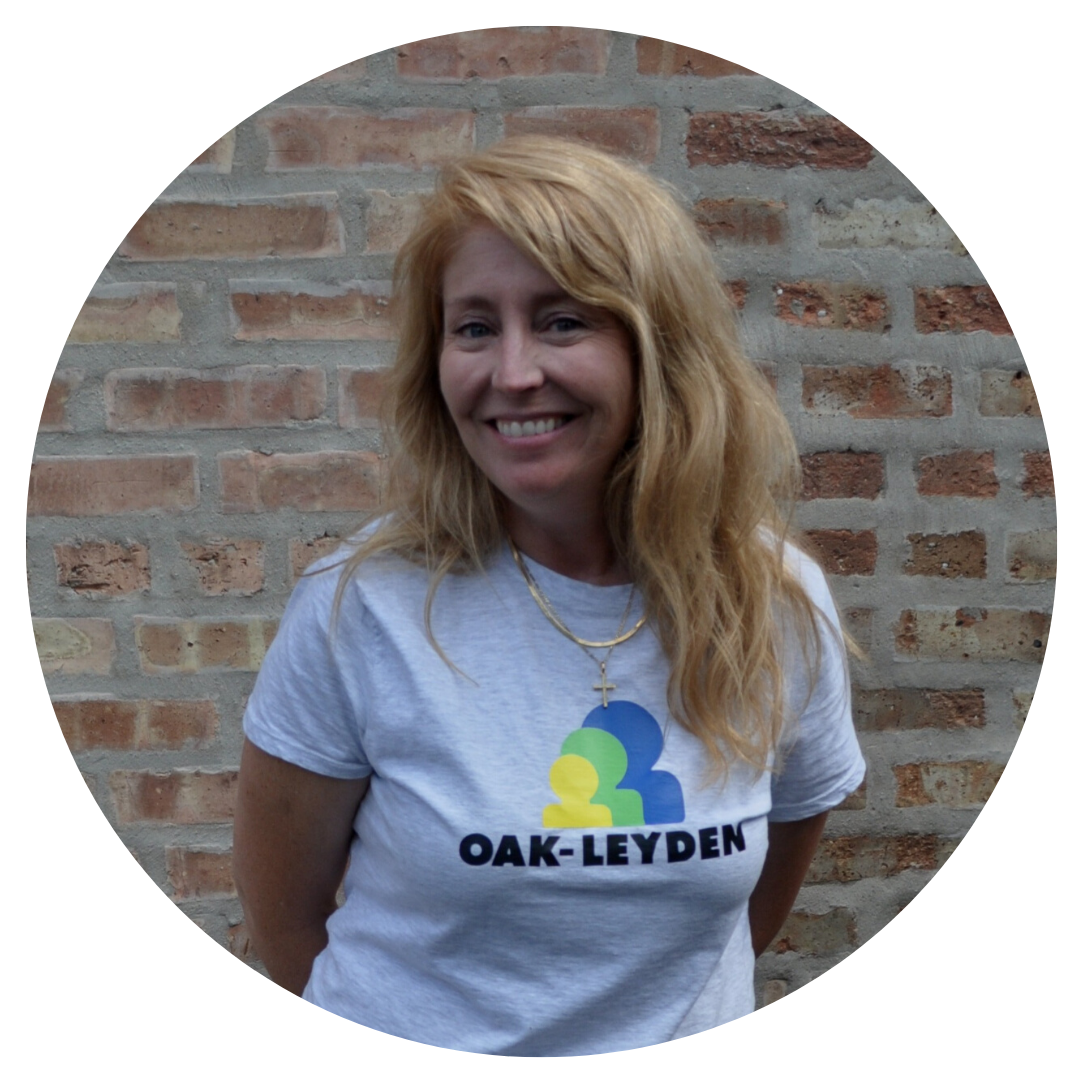 Christine Langs, M.Ed., – Developmental Therapist
Christine received her Masters of Education in Special Education from the University of Illinois at Urbana-Champaign.  She previously worked at United Cerebral Palsy of Chicago in their Early Intervention program before taking time off to raise her children and moving to Boston.  Christine joined the Oak-Leyden team in September 2018.  She is invested in providing Development Therapy services to children and their families. Christine is also a Chicago Parent program group leader. 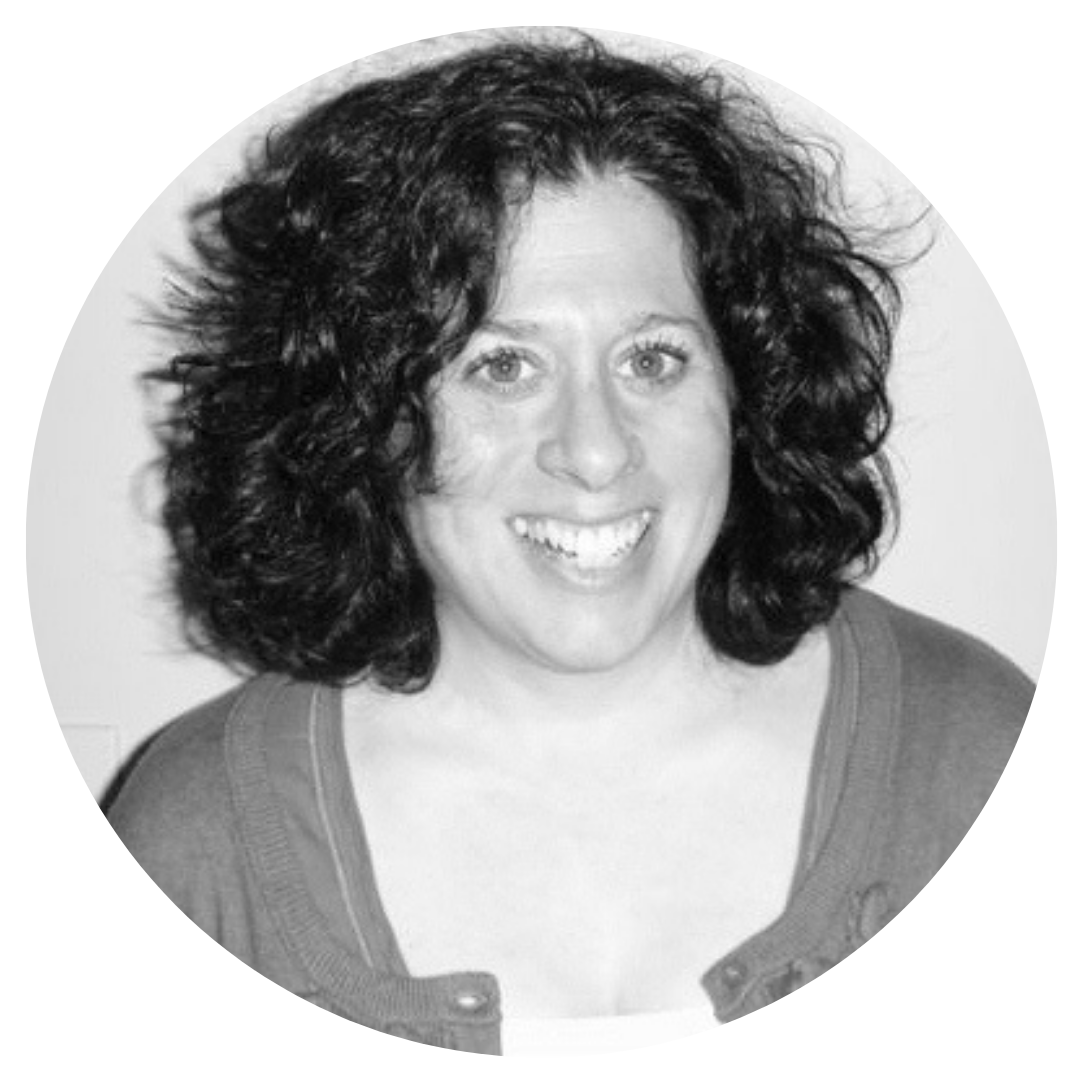 Meg Bracco Liebreich, PT – Physical Therapist
Meg has worked in pediatrics since 2000. She uses a sensory-motor and developmental approach to therapy; her treatment sessions are developmentally appropriate and play-based. She includes the parents’ concerns and the child’s temperament in developing an appropriate treatment plan, where the therapist, child, and family work as a team to reach the goals they have set together. Meg graduated from Marquette University’s Program in Physical Therapy in 1984. She has worked in all areas of Physical Therapy (pre-natal/postpartum to geriatric rehab) and has been working exclusively in the area of pediatrics, primarily through the Early Intervention program, since 2000. Meg has participated in a variety of continuing education over the years. Meg enjoys treating children with sensory processing challenges and gross motor delays and works closely with other team members to support the child gain confidence in their abilities. Meg is also a certified children’s yoga teacher who received her training through Rainbow Kids Yoga and is a professional development training consultant for the Early Intervention Training Program at the University of Illinois. 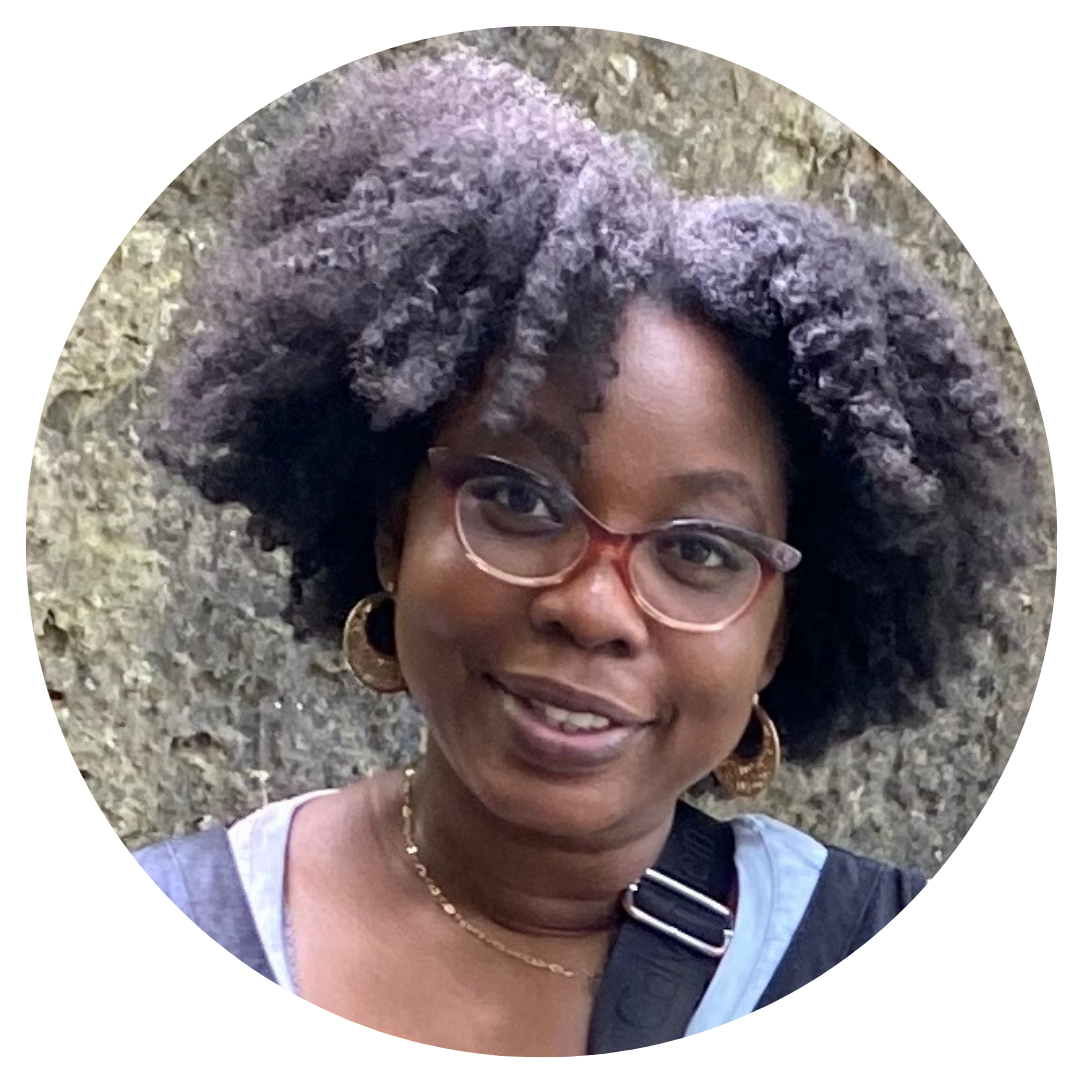 Thelma Segbawu, MSOT, OTR/L – Occupational Therapist
Thelma received her bachelor’s degree in Business Administration at the University of Ghana and her master’s degree in occupational therapy from Chicago State University in 2012. She is a pediatric Occupational therapist at Proviso Area for exceptional children. She has worked with children with autism, sensory processing, selective mutism, and other neuro-developmental disorders. She has training in interactive metronome, Rhythmic movements, and primitive reflex integration for optimal function, and handwriting without tears. She is excited to join the Oak-Leyden team. Haviva Siegel, MSEd, DPT – Physical Therapist
Haviva joined Oak Leyden team in 2012. Haviva earned a Master of Science in Childhood Education from Syracuse University and a Doctorate of Physical Therapy from the University of Illinois, Chicago. She has over 10 years of experience in the physical therapy field and a lifetime of experience working with peers and children with special needs and their families. She works collaboratively with children and their caregivers to provide functional physical therapy services and to obtain the necessary equipment. She has a passion for supporting families through advocacy to meet their child’s needs in their homes and around the community. During her Doctorate work, she accomplished two pediatric specialized grant training programs: Graduate Trainee of the LEND program (Leadership and Education in Neurodevelopmental and Related Disabilities) with a focus on Autism, and The Office of Special Education’s training for PT and OT’s for Increased Participation and Inclusion of Children with Low-Incidence Disabilities in Urban Environments. She also has specialized training in torticollis management, gait, and orthotics management for a variety of diagnoses and breath support via training with Marry Massery. 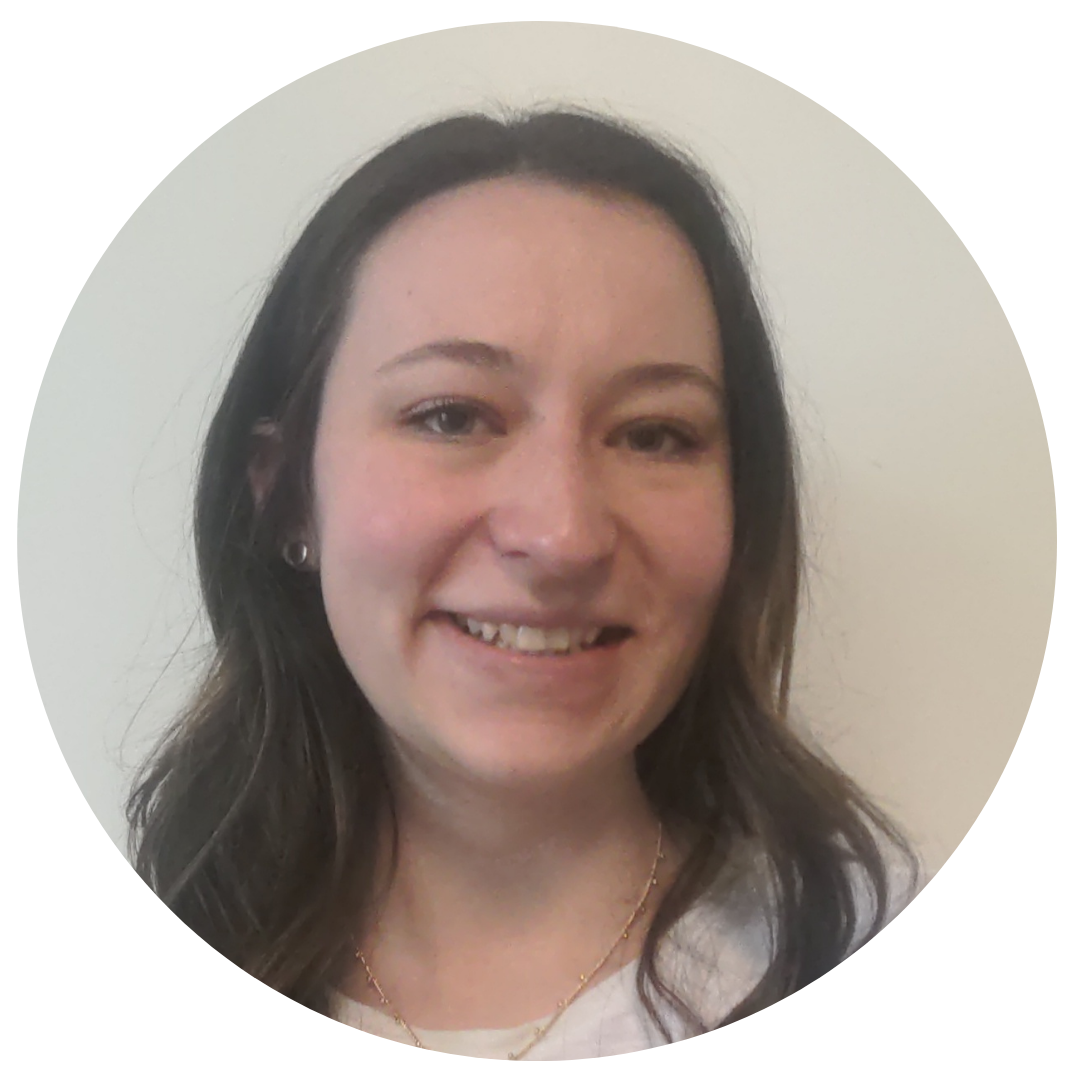 Alissa Thozeski, MA, CF-SLP – Speech/Language Pathologist
Alissa graduated in 2020 with her Bachelor of Science in Speech Pathology and Audiology from Kent State University. She stayed at Kent State to receive her Master of Arts in Speech-Language Pathology and graduated in December 2021. After graduating in December, Alissa moved from Cleveland, Ohio to Chicago. She is thrilled to have found such a wonderful team at Oak-Leyden and is most looking forward to helping children strengthen their communication and language skills while working alongside their families! Amy VanSanten, MS, PT – Physical Therapist
Amy received her Master of Science in Physical Therapy from Washington University in 1993. She has additional postgraduate training in treatment of babies, neurologic diagnoses, and working with families. She has worked in Oak-Leyden’s Early Intervention Program since 1996. Her areas of specialty include working with premature infants and children with hypotonia.